In addition to the stage programme, Schaubude Berlin curates exhibitions in the foyer and in the display windows of the theatre. The artistic and topical themes change two to four times a year and spice up the surrounding urban space in their own way. An open invitation to experience art – for our audience, for all passers-by, and for the neighbourhood. 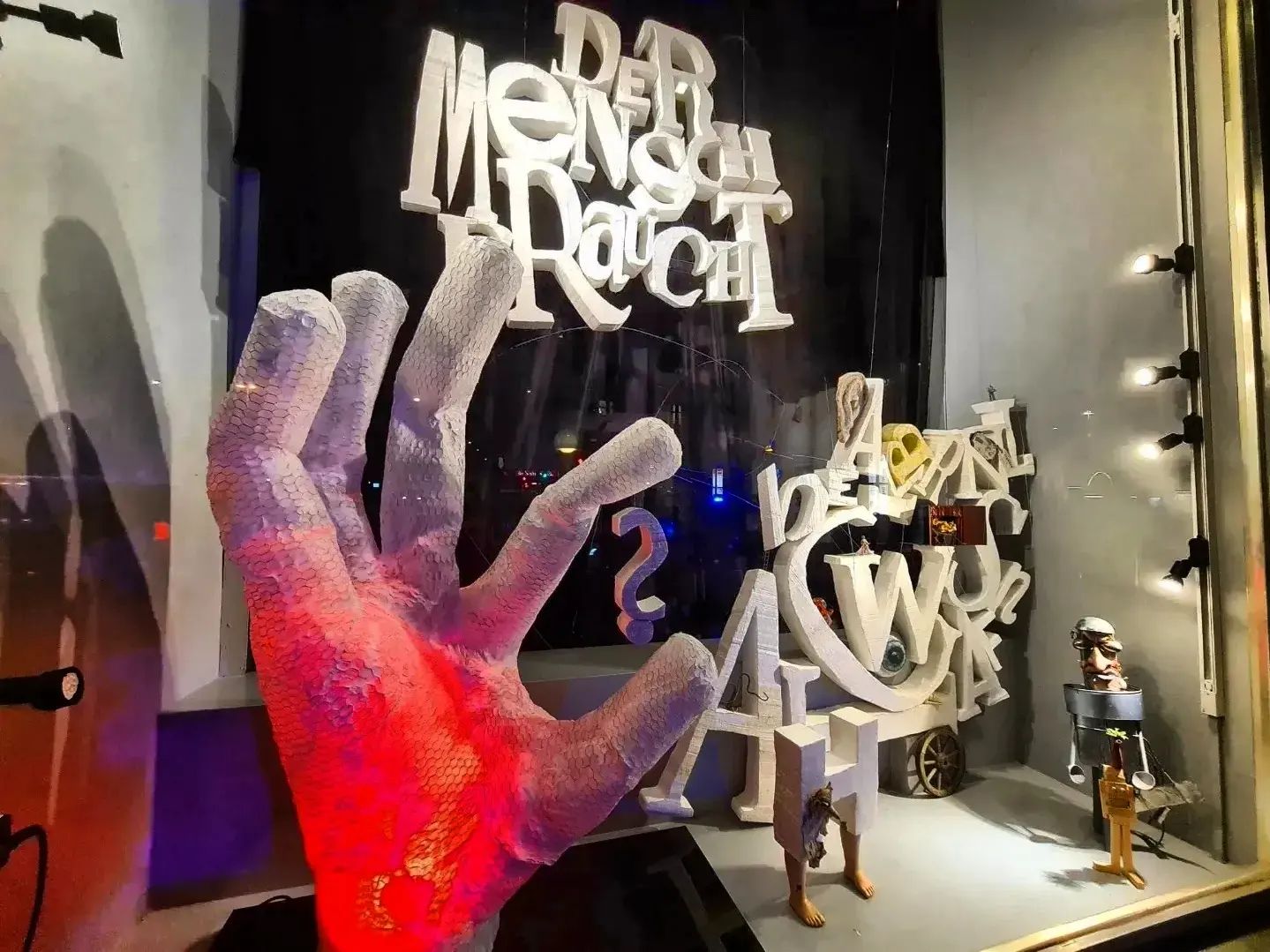 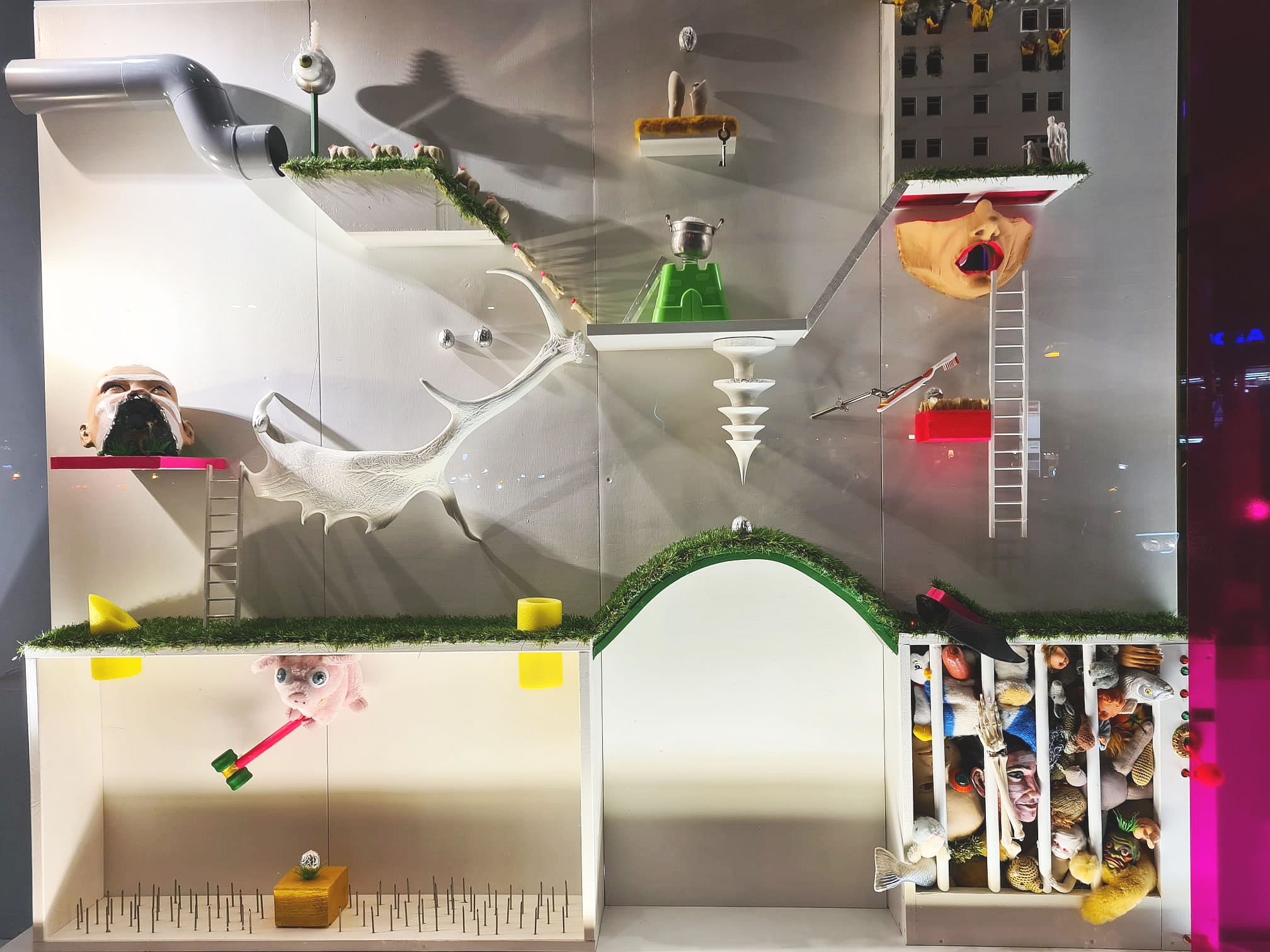 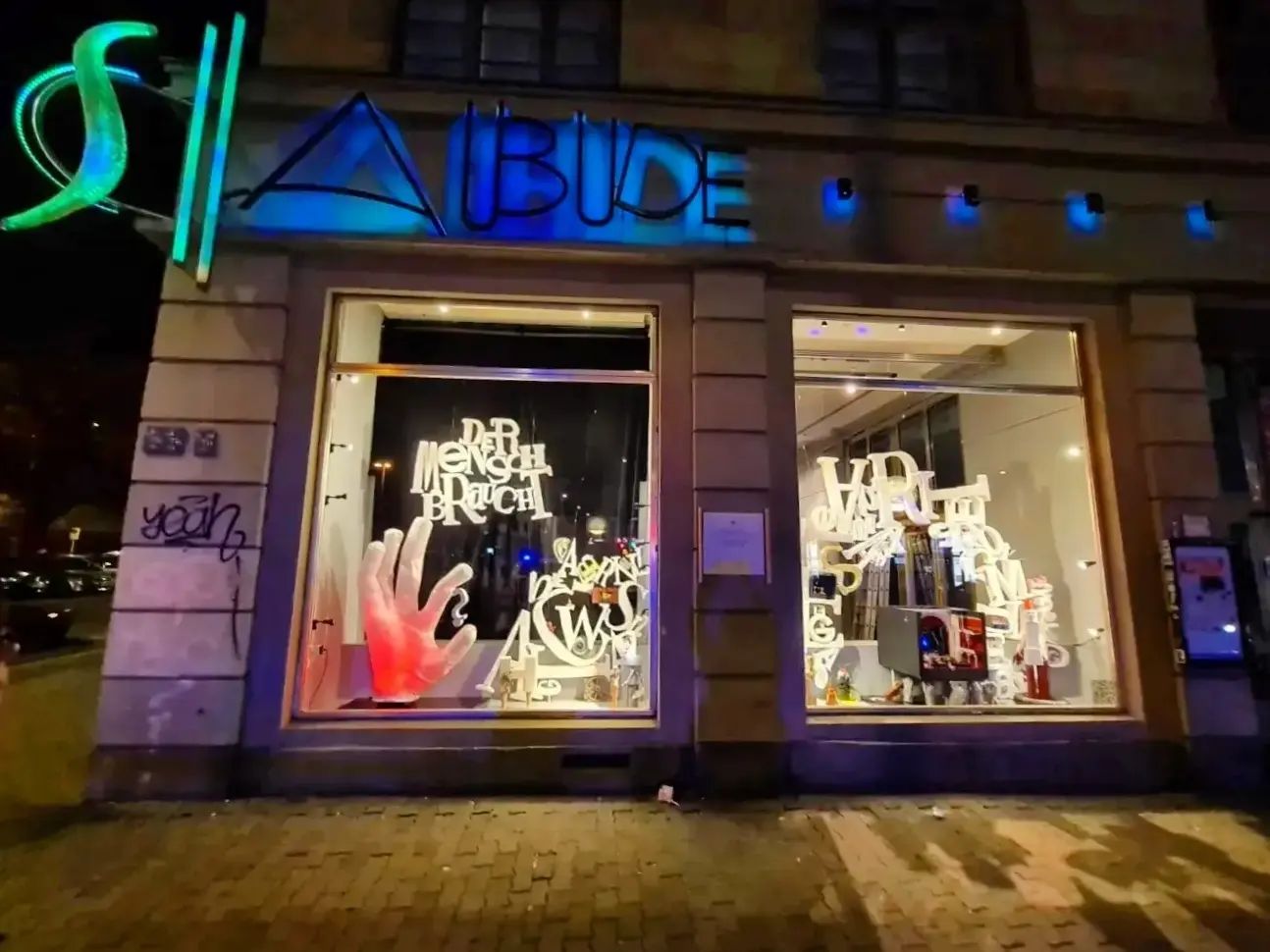 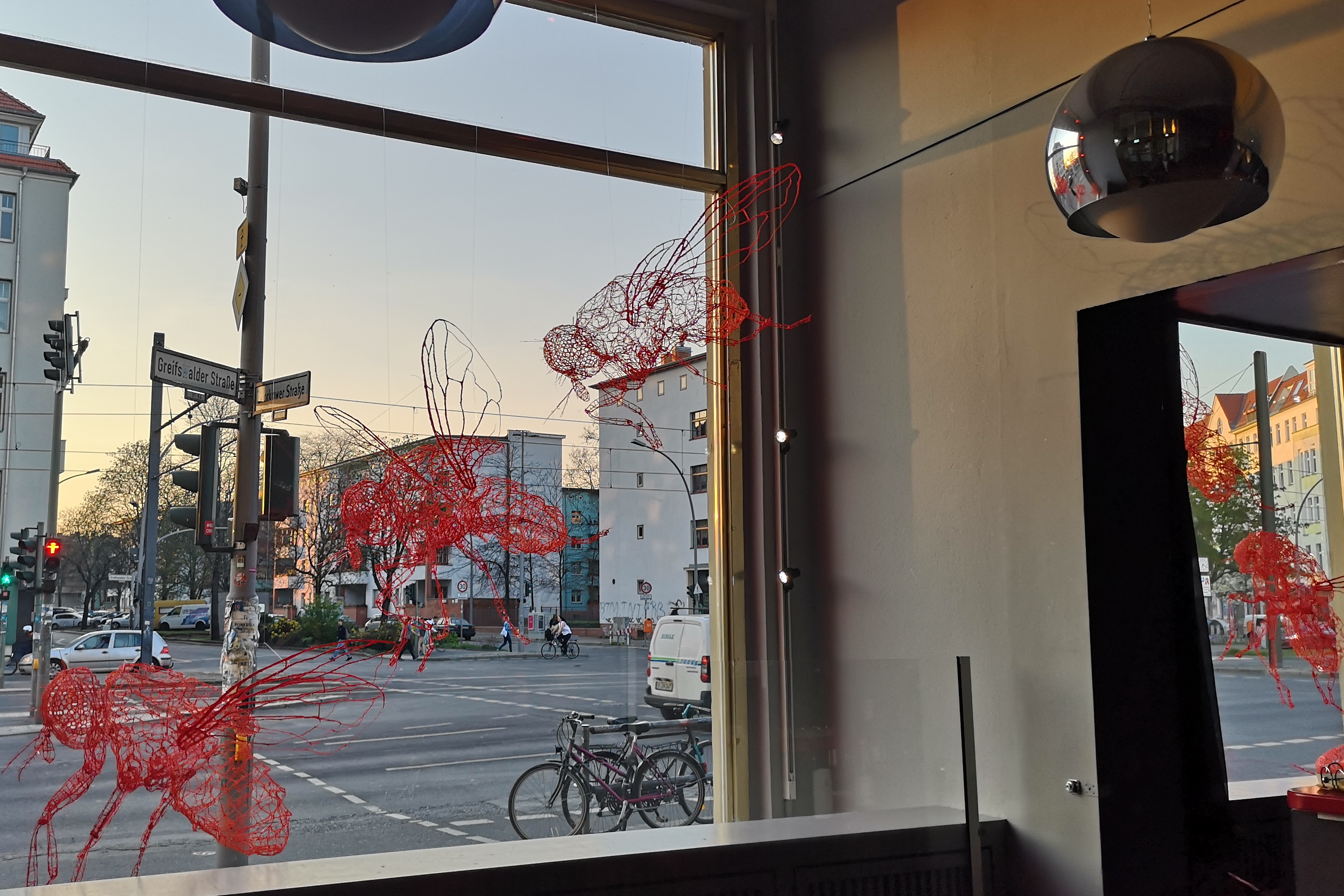 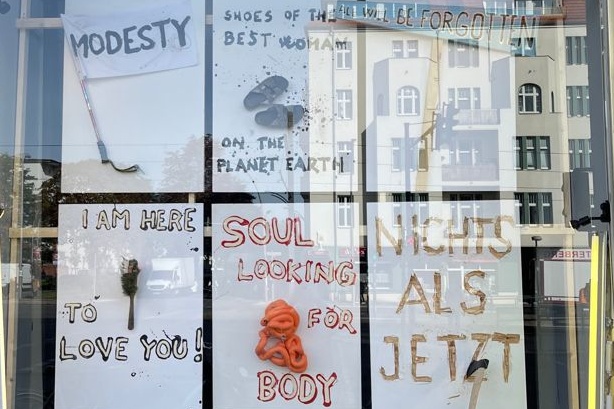 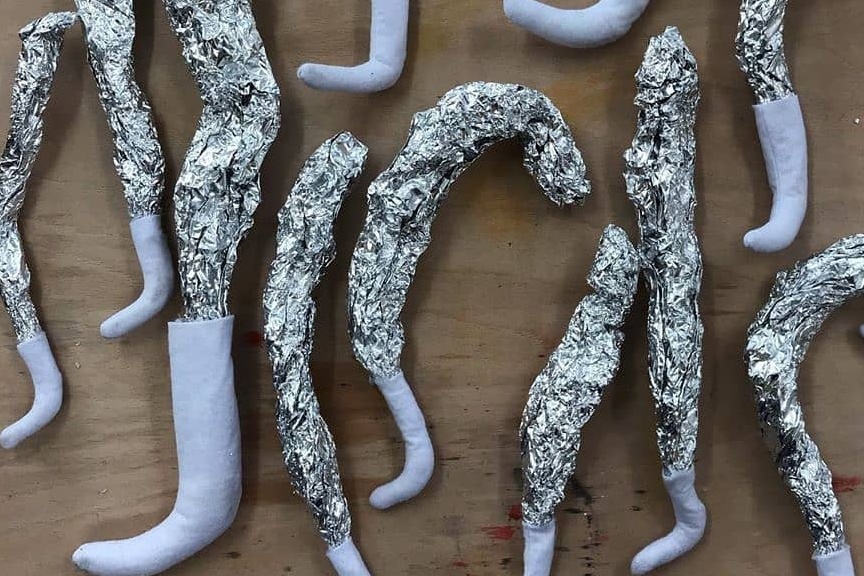 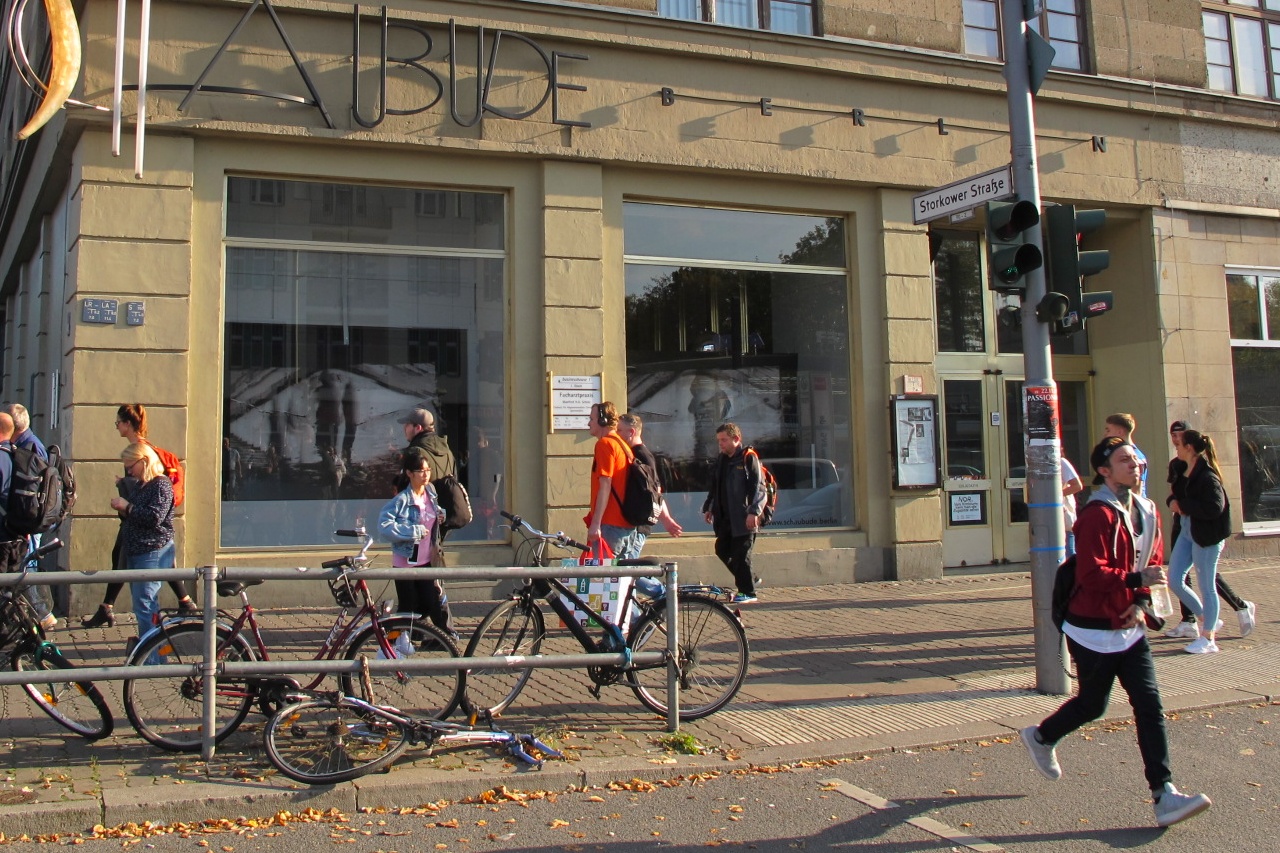 the operation on two functions (f and g) that produces a third function (f*g) that expresses how the shape of one is modified by the other.

How can we as a society move on TOGETHER and engage with the OTHER(ness) around us, transforming and evolving in TOGETHER, rather than just as individuals or as a single group?

With »Convolution«, Fiona Kelly wants to focus on the traces of those voices that we often do not hear or perceive.

Do we change ourselves by consciously perceiving a convolute of things? How do we communicate with them? How do we connect to them and the world?

Connecting is the core of this work. This is symbolized by the line, the movement from one point to another, the path in between. It shows us the trail of an existence: something or someone was here and left something behind. Maybe a (script) character with a meaning.

When different lines are connected to each other, a kind of network is created, a weave.

»a line allein ist nie allein a line« opens up these concepts and with time this line can point in different directions and thus connect the passer-by with his/her (non-)direct environment in a variety of ways.

The blind »seAe spider« brings many lines together, weaving her web incessantly. As a fantastic hybrid character her web symbolizes the entire water network on this earth. She looks after it as well as its purpose to connect land with land, lives with lives. Since she is blind, she perceives the world differently and has developed other forms of communication. In her net she captures those mostly unnoticed (also the more-than-human) voices, enabling us to perceive them.

The »(SeAe-)Water story net with 8 x ∞ voices« symbolizes 8 perspectives of 8 mythological female characters who have an unusual connection to the sea or water and who are often forgotten.

Since 2017, Fiona Kelly has been accompanying many women and girls in her projects in order to keep creating ∞ - many (infinitely many) new, up-to-date versions of these stories and giving them new meanings. Each of the 8 women is represented by a specific natural fiber rope and a special knotting technique within the net.

All elements of this exhibition follow the line of this symbolism and continue to tell and retell their own stories in their very own way.

The crossings are encounters in the form of a convolution.

Do you find yourself again?

After a journey through the many connections?

What do we need? Questions, but answers too. That unsettle.
Take your time and discover the scope in the niches of the information mountains.

You can find more information about the exhibition on our blog.

Pick a character to send it on a journey, on the hunt for the shiny nuts. Let them win or lose, let them live or die. It's real. It's analogue. It's in your head. Play it in your mind.

A collection of drawings, material collages by the Czech artist Krištof Kintera occupy the two large windows of the theatre for a while. Kintera's works are activist, anarchic positions on questions of our time.

An exhibition in the frame of the international festival Theater der Dinge 2021.

The federal election is coming up: Do you have a choice? Who actually votes? We have questions.

Schaubude Berlin and the performance collective Anna Kpok have developed a participatory installation for the theatre's show windows and the urban space. Full of questions about participation, power and secret decisions. Because "We have to talk - about the election."

A project within the framework of "New Communities", funded by the programme "Digital Developments in the Cultural Sector" of the Berlin Senate Department for Culture and Europe.

Objects and videos from the art and theatre class
August 2021

"By 2030, researchers will have figured out how to integrate masks as a body part through surgery ... By 2045, we will have completely digitised relationships ... By 2079, we will have fallen off the edge of the earth."

Just a phase or a transformation: what is happening to us? And how will we look back on this time at some point? An experiment with the uncanny, the fantastic and the comic behind the mask and between the distances.

Students of the art and theatre class of the Staatliche Ballett- und Artistikschule Berlin take a look back from a future that continues to spin our present.

Hearts are organic reaction spaces surrounded by hollow muscle. Permeably rooted monuments within us. They embrace and are embraced. For hearts are the experience of repeatedly rebelling and letting go. HEART is an installation with a 25-fold enlargement of a heart made of 14 kilos of truck tarpaulin, which periodically rises and falls, permanently/not permanently, pumping and absorbing, being-in-the-world, inviting us to look and pause.

Li Kemme is a freelance artist in the field of puppet theatre and also in performance, construction and music.

A species of fragile bodies lives out its existence. These animals gesture, try, fail and change.

A video of and an audio comment on the exhibition can be found at theaterderdinge.com.

A Space-Time Installation of Chaotic Algorithms

The exhibition shows a sequence of hand-made 3D models that simulate time and movement. Six flies draw an imaginary timeline in the room: the impression of a single fly that moves from one window to the next and even makes a quantum leap through the wall. Mind the gap! Only the spatial distance between the sculptures gives the impression of movement and time.

Inspired by 3D models, the artist used his own nervous system to translate the polygon-based geometry of digital objects into arbitrary shapes. The six flies in the sequence consist of 3D filaments and voids forming a complex network consisting of lines and nodes (the most efficient number of lines per node is 3-4)*. The way they spread and connect individually cannot be controlled since the material itself decides depending on the temperature, hand movement, and weight. Despite the local differences in structure, the resulting main forms resemble the same fly with the same anatomical, morphological properties. The flies are actually more empty space than solid material. Paradoxically, the gaps are a more essential »construction material« than the material itself.

The process of creating the sculptures is based on the principle of emergent phenomena - complex, self-organized geometries that can be found everywhere in nature, from slime mould to the structure of dark matter in the universe: an unplanned network without a centre, without a hierarchy and without an author.

* hese lines and nodes follow the same simple rules, which are spreading and joining together again, and the nodes should not gather more than 4 lines at the same point.

Lautaro Bianchi's pictures show tunnels. Introspective states. Distorted outlines that move on the water and end up in a frame that resembles an eyeball with flickering irises. A reflection as a "space-time input".

"I photographically capture this fantasy image, this fear of transcendence or the difficult."

Blog of the residency team, and teaser:

Now available as an inspiration for other production houses in transition: the documentation (in German) of our one-year joint project with Spiel und Objekt on digitally supported dramaturgies and new delocal forms of collaboration!
read more

Kristina Feix und Grit Wendicke : sicher verunsichert September 2022 till January 2023 Vernissage: 9.9.2022, 19 Uhr What do we need? Questions, but answers too. That unsettle. Take your time and discover the scope in the niches of the information …
read more